Although Later There Was an Ick Factor

I'm going to start off just by saying I'd forgotten how fantastic this episode is. I think my general distaste for DB and who Angel becomes on AtS clouds my memory, because - this episode is really damn good. The writing is clever and clear - it's funny, it's character-developing, and the moral grey areas are all over awesome. It's also a great precedent-setter for the rest of the series - vampires are not guaranteed evil and (frankly?) dull, like they were in the film, or how they've mostly been up till now. Also? That dude is a vampire and we (theoretically) didn't suspect. And he killed that chick we expected to hang around being a villain for much longer (of course, that didn't stick, but how were we to know that then?) And of course the In Love Angst is perfect.

Agreed with Zelda that this was a great episode setting the vampire lore for the rest of the series and pretty much for me forever.  BtVS has spoiled me for other vampire flicks and books and tv series.  It just makes so much sense that it's the soul that makes you good and that when you become a vampire, your soul is swapped for a demon.
Willow:  How is it you always know this stuff? You always know what's going on. I never know what's going on.
Giles:  Well, you weren't here from midnight until six researching it.
Willow:  No, I was sleeping.

Zelda hates Angel. Daniel loves Angel. Both of them are having trouble articulating their positions at the moment.
Daniel:  Well...there's this: 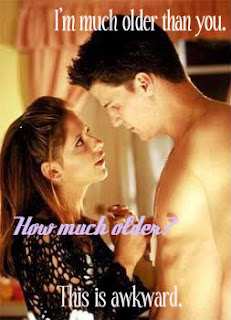 Daniel: "Why is his voice like that?"
Zelda: "Cuz he's the annoying one."

Zelda: "You have no idea what it's like to have done the things I"ve done ... and to care." - Angel
Daniel: "And 'A' doesn't even stand for 'Angel' for that matter, it stands for... 'Achmed', a charming foreign exchange student, so that whole fantasy part has nothing to even do with you at all..." - Buffy (I like rambly Buffy)