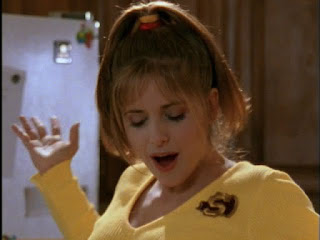 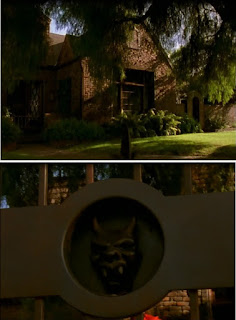 The Earth is Doomed 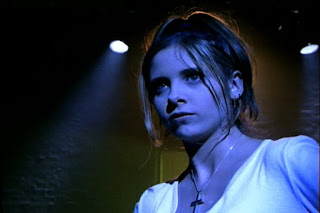 Zelda: I just have to take a moment to ask ... who the heck is this guy? His drop into frame is unabashedly hilarious, but ... Who? What? Huh? ("Three excellent questions.") The hair, the outfit, the alarming similiarity to Breckn Meyer's character in Clueless - clearly we have located Sunnydale High's Resident Random 90s Stoner Guy. Which ... fine, there were plenty of those. My question is, why is Cordelia talking to him? Why does she not immediately say "ew" and "butt out" like she would were that Xander or Jesse or - as we see in a few moments - Willow? I call Shenanigans.﻿﻿﻿﻿﻿
﻿

Daniel:  While I agree that normally she wouldn't talk to this guy, Cordelia is smart about the thing she values most: her popularity.  When Buffy attacks her she says, "Excuse me, I need to call everyone I've ever met."  And I don't think that's much of an exaggeration.  Cordelia's aim in this episode is to let everyone know how 'crazy' the new girl is and if she can hit the stoner crowd, the more the better.  The reason she lashes out at Willow is because Willow defends Buffy.  That said, I'm so glad that the 90s Californian stereotypes didn't really make it past the first few episodes, e.g. 90s stoner guy and the two valley girls who find the dead guy in their locker.


Zelda: "Jesse was an excruciating loser." - Jesse (I just adore how he can't say any of the words with vampire teeth. Sorry, Eric Balfour)
Daniel: Willow: "I need to sit down"  Buffy: "You are sitting down." Willow: "Oh. Good for me." (Just a really cute Willow moment.)


Giles says "Go on the net" to Willow as she uses the Giant Fucking Computer. She does a "computer search." 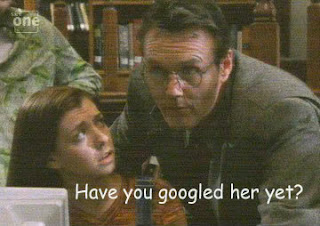 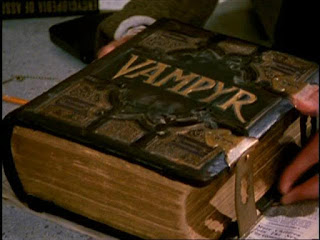 Because really, it’s the first episode – the episode that sets the standard for the show and WttHM is usually revered by Buffy fans as being one of the best [really? I mean, I like it, but it would never make my top 10. - Z] and while I agree on the whole, there are so many problems with it.  There are great subtle nuances that show us what this series will be like.  We’ve got a great opening where the viewer is tricked into thinking nameless guy is luring this poor innocent schoolgirl in order to seduce her and eat her neck except surprise (!) – It’s actually the poor innocent schoolgirl who turns out to be the vamp!  And so we’re introduced to Darla, a character that will be forgotten and then remembered and go through many changes despite not being able to age. *snerk* And the surprise “reveal” will become a staple of this show. And then we settle into the other half of what this show will ultimately be about: Life in a 90s California H.S. Drama with the grunge music and the skateboard that Xander will never ride again followed ever so closely by a David Lynchian pan down below the high school to reveal the darkness that lies beneath.  “From beneath you it devours…”  Too soon? [Alternatively, it eats you starting with your bottom. Too soon? - Z]

We meet all the characters that will grow and change in many years to come including the dowdy best friend Willow in her most fabulous dress ever.  Willow: “I don’t actually date a whole lot…”  Me: “That’s because you’re a lesbian!”  Spoilers! Xander, whose abysmal line readings make me want to kill myself: “You forgot yourrrrrrrrrrrrrrrrrrrrrrrrrrrrrrrr stake?”  Yet, it’s pretty tame compared to how much I’ll begin to hate him later. And Joyce.  Oh, Joyce.  Worst. Mom. Ever.  And I know people love Joyce and I think the first time I watched this show, she didn’t get on my nerves that much but she really doesn’t try that hard to understand her teenage daughter, does she?  Buffy is a pretty self-reliant kid.  Sure she burns down the gym and gets into fights…but if Joyce weren’t so blind, she might see why.  True, it’s a fault that many Sunnydale residents face but I just can’t forgive lines like: “And honey… try not to get kicked out,” - just inexcusable when you’re dropping your kid off for her first day of school.  We’ll revisit why Joyce is the worst in future episodes but now we turn to Angel.  We don’t know who this mysterious stranger is, yet all signs pretty much point to douchebag. “to kill them…to kill them all..”  Again, this is hardly the fault of the creators…because to their (and Joss’s) credit, Angel does develop layers later…but really?  Was this the direction that Angel was going to go?  And is there much to say about Jesse?  The “best friend” of Xander and Willow’s that we’ll never ever speak of again… Cordelia – who has the best lines of the episode but hasn’t really found her place yet.  And finally Buffy, played by SMG here with actual curves.  A girl, we’ll find in episode one who just wants to fit in – to find a group of friends and be “normal”.  But she never will be( Spoilers!) and that’s what we love about her. It’s also why we identify with her so much.  My biggest beef with this episode, though, was the scene between Giles and Buffy which will be featured in the section: CROSSFIRE!    So I know I point out many problems with this pilot, but the truth is, it brought me in and slowly made me a fan.

If I were coupling this episode with its second parter “The Harvest”, I may give it a 5 stake rating but for now: 4.5 Stakes.


Daniel: I understand that a series premiere needs some sort of exposition but it sort of happens at the expense of making Giles seem incompetent.  There will be many instances of this in upcoming episodes that will make me tear my hair out wondering why the not-mentioned-yet council would send him to train the only active slayer…but I’m getting ahead of myself.   The part that irked me the most is when Giles asks Buffy if “the young man” will rise.  Buffy explains that in order to turn a vamp, you each have to suck each other’s blood…it’s “a whole sucking thing”….which…great, if he were asking for an explanation of how Vampires work…and since he is a Watcher…he already knows that.  And again, I understand that the audience needs to know how vamps in this particular sci-fi universe work but 1) they could have had her explain it to someone who knows nothing about vamps like Xander or Willow and B) It didn’t answer his question.  She doesn’t know if “unnamed first victim of the series” fed on the vamp or not and can’t be completely sure that he will or won’t rise again.  She runs into that problem a few times…most notably with “Theresa” in season 3. Shenanigans!

Zelda: While I take your point about the "whole sucking thing" - she really didn't seem to check (and how would she be able to tell?), BUT we don't see her leave the scene. We only see her find the body and the bite marks. It's possible she spent a good solid bonding twenty minutes with Dead Guy, chatting about this and that, checking for flecks of dried blood in his gums. WE DON'T KNOW. But what I'm doing right now is trying to write in non-existent scenes, so we'll leave it at that.

To your other point, about why Giles is having this Blatantly Expository Dialogue with Buffy about things any Slayer or Watcher worth her or his salt should know, I say this - Giles and Buffy barely know each other. What does Giles know about Buffy? She's a blonde LA girl - a perky insolent slang-talking American - who seems entirely uninterested in his many back-breaking books on the occult. She got her last watcher killed. She burned down the gym at her old school - not covert behavior at all - and got kicked out. Does Giles have any reason to trust that Buffy understands the first thing about her heritage? He's testing her. He needs to feel out this tiny stranger whose burden it is to save the world, and see if she actually has the stones to do it. ("Oh, I got the stones! I've got a whole bunch of ... stones.") He needs to try and clarify what his job will be in all this as her Watcher - start from scratch, or pick up from where Donald Sutherland left off?

Daniel: "Good to know you've seen the softer side of Sears." - Cordelia
Zelda: "What is your childhood trauma?" - Cordelia 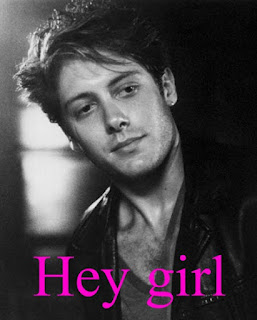 If the apocalypse comes, beep us: Our Mission Statement 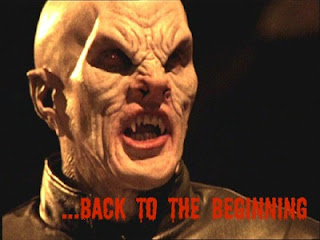 Daniel and Zelda met when Daniel joined the army of receptionists at Zelda's office, Wolfram and Hart. Over the course of training, Zelda and Daniel got to chatting about various crossover topics of interest, and the subject came up of The Best Television Show Ever. (Buffy. Duh. Why do you think we're here?)

Daniel and Zelda were delighted to find they agreed on this point. However, as further discussions developed, the two found there was much on which they disagreed - Tara. Xander. Spike. The comic books. Season Six in general.

After much debate, hurling of quotations, cries of "It's Canon!" and Rick-Rolling, Zelda and Daniel reached one conclusion - they must rewatch the series, start to finish. And they must continue their debate in as public a forum as they can muster.

Here on Once More With Extreme Prejudice, Daniel and Zelda intend to duke out their differences, bask in fond remembrances, crack wise about the Whedon, and call shenanigans whenever they so please.

We will also be keeping a running tally of dead bodies, dead undead bodies, unconscious watchers, and slayers that go kick in the night.
Posted by Zelda Knapp at 12:57 PM 5 comments: