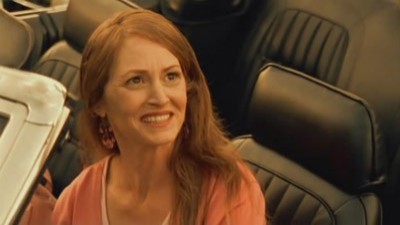 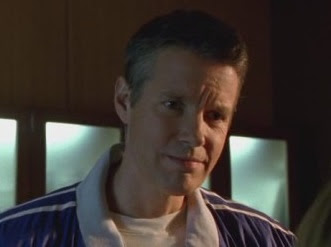 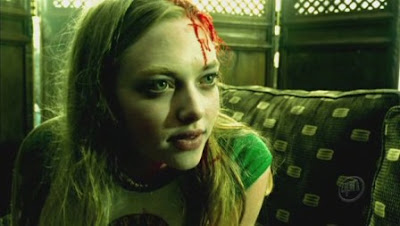 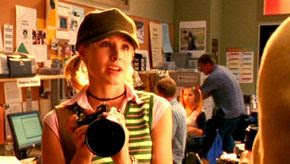 
"When Weevil's grandmother is arrested for credit card fraud, Veronica and Wallace reluctantly help the investigation to clear her name. Meanwhile, Logan's new girlfriend, Caitlin Ford, joins the 09ers in making Veronica's life difficult, while a new arrival in town, Troy Vandergraff, tries to get to know her better." 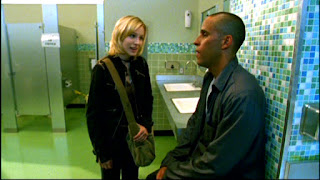 "Meet Veronica Mars. Your typical high school student and private eye. A year ago, Veronica's best friend Lilly was murdered. Her father, Keith, then the town sheriff, accused Lilly's billionaire father of the murder. When another man confessed, Keith was booted from office. All of Veronica's friends stopped talking to her, and her mother left town. But as Veronica starts her junior year of high school, it becomes clear that nothing about her life is what it seems."

Daniel: "Tonight we eat like the lower middle class to which we aspire! - Keith Mars
Zelda: "You're a marshmallow, Veronica Mars." - Wallace

Season Seven certainly upped our body count, taking top place in Dead Undeads, Potentials (fine fine, a contest of one), and Flashbacks, while failing miserably at Giles statistics, since he abandoned us and moved back to pip pip land. We are pleased to see a return to our bitter skepticism, with an uptick in Shenanigans Called. And I think we can all agree that we've ended in triumph if our Dead Undeads count is nearly double that of Dead Humans. Take THAT, First Evil!

I don't know how much I have to say about Season Seven that I haven't already said, honestly. A lot of it reminds me of Season Four, in terms of being set up for one kind of conflict, then meandering around with distractions through the middle of the season, before arriving at a strong enough finish. I wish the Potentials had been either better written in order to justify their distraction from our core Scoobies, or that they, you know, hadn't been A DISTRACTION FROM OUR CORE SCOOBIES. I love that Anya got her own "Fool For Love" origin episode, and hate how much she disappeared into unimportance afterward. I hate how the show made me hate Giles (and hate the writers themselves with the fakeout about his being the First). I hate "Empty Places." I don't much care for Kennedy, though I do like seeing how much healthier Willow's gotten post-dark-and-veiny. I like that Xander actually seems to be approaching functional adulthood even if he's still a bag of tools sometimes. I love Dawn's growth???? This rewatch made me realize I've stopped hating her by the end of Season Seven. I hate Buffy's isolation from the group, though at least I understand why and how it happens. I love the beauty of Buffy finally having freedom, being able to share the weight of saving the world with others so it's not just about she alone saving the world (dying twice is quite enough, thank you). And yes, I enjoyed the Spuffiness that Season Seven gave me, even if it was at the expense of the writers just not knowing how to handle the events of "Seeing Red" or their outcome. And you know what I loved? How Season Seven, knowing it was the show's final season, threw in more shoutouts and throwbacks to earlier seasons than ever before - from invisible loners at school to calling Xander out on "kick his ass" to the Scoobies parting ways before the battle and Giles concluding the world is definitely doomed. That felt like the best kind of fan service, and I'm grateful for it.

Speaking of gratitude, for all its faults (which we've spent the past few years pointing out), I really love Buffy, you guys. I think it's a fantastic and ridiculous show that I can't quite believe exists sometimes, full of dialogue I quote freely to this day, full of characters I love, full of pain and joy and vitality, full of remarkable achievements like "The Body," "Hush," and "Once More, With Feeling." I'm grateful Joss decided to write a musical episode, without which it would have taken much longer for me to get around to watching this show and realizing how special it is. I'm grateful for the friends I've made because of it (especially Daniel!). I'm grateful to you guys for sticking around to read us talking about it. This is basically me:

We'll be back in two weeks with the pilot of Veronica Mars! Be sure to take Backup.