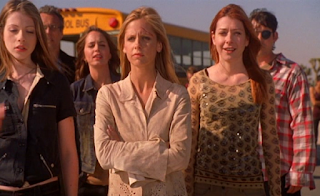 "After killing Caleb, Buffy conceives a plan to defeat the First once and for all. Willow invokes a magic spell that alters the ancient Slayer spell and gives Buffy the allies she needs to fight the Uber-Vamp army. An epic battle ensues and several good friends are lost. At the end, Buffy faces a completely new problem - one she's glad to have."

Favorite Lines:
Zelda: I can't choose between "Are you ready to be strong?" and "The earth is definitely doomed."
Daniel: "I just figured you'd be terrified and I'd be sarcastic about it." -Anya

HEY MARSHMALLOWS...!  We'll have our series recap next week before we take a bus from Sunnydale to Neptune and delve into Veronica Mars recaps.  Stay tuned! 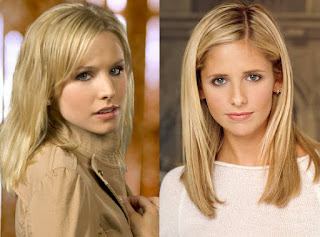 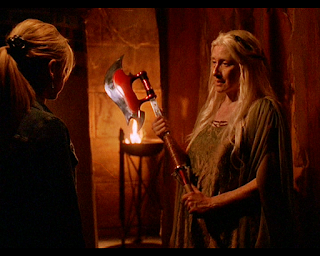 "Faith and the Potentials search underground for a weapon, whilst Buffy confronts Caleb at the vineyard." 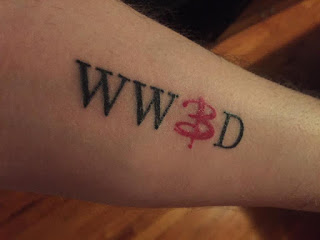 Buffy: I feel bad and everyone hates me.
Spike: You’re awesome and I’m the only one who will tell you that because I’m awesome and the writers apparently hate everyone else.
Scene


Favorite Lines:
Zelda: "I've been alive a bit longer than you, and dead a lot longer than that ... A hundred plus years, and there's only one thing I've ever been sure of - you ... I'm not asking you for anything. When I say 'I love you,' it's not because I want you or because I can't have you. It has nothing to do with me. I love what you are, what you do, how you try. I've seen your kindness and your strength. I've seen the best and the worst of you. And I understand with perfect clarity what you are. You're a hell of a woman." - Spike. DEAL WITH IT.
Daniel: "We're all on death's door repeatedly ringing the doorbell like maniacal girl scouts trying to make quota." -Anya

Everyone Sucks But Buffy 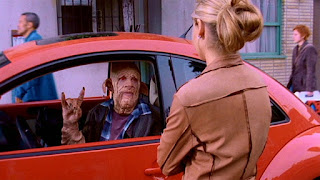 "After their horrifying loss at the vineyard, the gang turn against Buffy and begin to follow Faith instead. Meanwhile, Spike and Andrew travel to an old church to question a priest about Caleb."

Favorite Lines:
Daniel: "Trade you for a pack of cigarettes and soap." -Faith
Zelda: "Tell anyone we had this conversation, I'll bite you." - Spike