She Saved the World. A Lot. (Seriously, check out the stats!)


While the ratio of Dead Undeads vs Dead Humans still lands us overall on Yay Team Scoobies, Season Five on its own sees more dead humans than dead undeads (credit for this imbalance should probably go to Glory's massacre of the Knights Who Say Key). In the meanwhile, Giles did well, cleaning his glasses six times this season. And it's good to know our Shenanigan game is strong, with a 5 point increase on last season. Season Five did, at least, improve its game - Season Four saw no exponential growth in the stats, whereas here only Buffy's door-breaking and Evil Reveals went down.


Zelda's Thoughts:
So generally I really like Season Five. I think Buffy's arc is fantastic, and extraordinarily well-acted by SMG. I like the arc of the family of the Scoobies - over the season we see a better integration of both Tara and Anya into the group, which becomes especially important when Joyce, the matriarch, dies - it becomes a death that touches all of them, though to different degrees. On the quality of The Body alone, Season Five must be special.

That being said, it has its weaknesses. While I like the idea of Glory as a villain - a feminine Cordelia-esque snark, and distinctly nothing like the previous Big Bads of the Master, Angelus, the Mayor, lame-os Adam and Walsh, or even Faith. But in execution Glory is weakened by a mediocre performer (as is Ben - it's no heartbreak to find out he's attached to Glory, because I didn't care about him in the first place). And then there's Dawn. Another cool idea, one which threatened massive shark-jumping, but actually managed to be pretty effective. But as we know, MT annoys me a lot, so I have trouble investing in her much. Next season will be a chore where she's concerned.

But back to family. One of the things Buffy does best is - even if over the season the Scoobies may divide a bit, may be at odds - they all recognize their strength as a unit working together. This has been increasingly true with each finale, most markedly in Seasons Three and Four. Here we see the Scoobies' individual contributions being pivotal in fighting off the apocalypse - Willow (and then Tara) weaken Glory, Xander whacks her with a wrecking ball, Anya had the brilliance in the first place to use the Dagon Sphere and the Buffybot, Giles fucking smothers Ben, and Spike ... well, unfortunately, Spike fails in his part of the mission, but he was supposed to protect Dawn while all this other stuff was going on. His failure is significant in terms of his own character arc - he's been on a slow path to improvement, trying to make himself worthy of his love for Buffy, with a lot of creeptastic layovers along the way. And while his dedication to Buffy and, by extension, Dawn, is strong, he's still not fully part of the mission, or the Scoobies.

I love season 5.  It's one of my favorites.  While season 4 separated everyone, season 5 brought everyone back together. Sure, sometimes that meant big tragedies like Joyce's unfortunate demise - but this season, it felt like the group of old with wonderful additions.

I never had a big problem with Glory or Dawn's actors.  I always thought Dawn acted as she was created, a bratty little sister. And I always thought Glory was a fun, crazy villain.  I also like the villainous arc of the season.  I felt Glory and in particular, the Scoobies interactions with Glory flowed well throughout the season.  There were constant things to find out and ultimately defeat.  We saw, we fought, we discovered, we protected, we ran, we had no hope, we dared to hope and then we defeated.  And I say 'we' because it felt like we were all on this journey.  And that's what this season ultimately felt like, a journey.
Posted by Zelda Knapp at 11:44 AM No comments:

Here to Help. Want to Live. 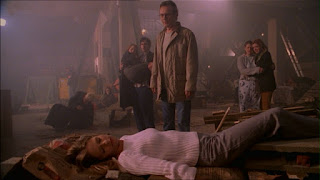 "As Glory prepares Dawn for a bloodletting ritual that will open a portal to another dimension, Buffy and her friends prepare for battle."
Zelda's Thoughts:


Daniel's Thoughts:
SPIKE: Why don't *you* go think outside the bleeding box.GILES: Yes, Anya, apart from your incredibly uninfectious enthusiasm, have you anything else to contribu-ANYA: The Dagon sphere!GILES: Sorry?ANYA: When Buffy first met Glory, she found that magical ...  glowy sphere that was meant to repel Glory. We've got it in the basement. It might drive her away or hurt her. Ooh!

Crossfire!
Spike: But you' treat me like a man and that's -
Daniel: *snorts**rolls eyes*
Zelda: Shut up I love it.
Favorite Lines:

Zelda: "We few, we happy few." // "We band of buggered." - Giles/Spike
Daniel:"You're proposing to me 'cause we're gonna die! And you think it's romantic and sexy and, and you know you're not gonna have to go through with it 'cause the world's gonna end!"/" I'm proposing to you, Anya, because it's not." - Anya/Xander 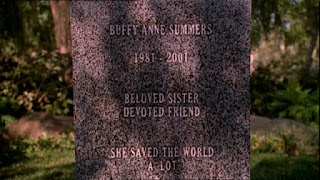 Is Everyone Here Very Stoned? 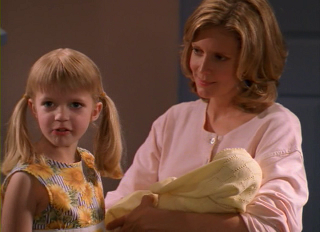 "When Buffy lapses into a catatonic state, Willow uses her magic to find out why; a tug-of-war erupts between Glory and Ben over Dawn's ultimate fate." 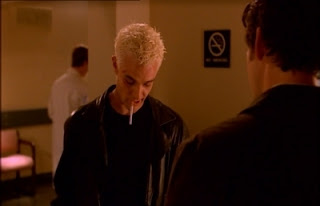 Crossfire!
Glory: Get out Get Out GET OUT
Daniel and Zelda: *lose it*
Favorite Lines:
Daniel & Zelda:

Spike: Ben! Glory! He's a doctor, she's the beast. Two entirely separate entities sharing one body. Like a bloody sitcom. Surely you remember.
Xander: So you're saying ... Ben and Glory ...
Anya: Have a connection.
Giles: Yes, obviously, but what kind?
Spike: Oh, I get it. That's very crafty. Glory's worked the kind of mojo where anyone who sees her little presto-change-o instantly forgets it. And yours truly, being somewhat over than human, stands immune.
Willow: So ... Ben and Glory are the same person?
Xander: Glory can turn into Ben, and Ben turns back into Glory.
Anya: And anyone who sees it instantly forgets.
Spike: Kewpie doll for the lady.

"Buffy and her friends flee Sunnydale when Glory closes in on Dawn."

Crossfire!
Buffy: *throws an axe into a Knight's chest*
Zelda: Is he dead?
Daniel: Yes. Oh! We haven't been counting.
Zelda: But Buffy's not allowed to kill a human.
Daniel: He got an ax in his chest. I think he's dead.
Zelda: ... people recover from that all the time.
[Editor's note: per IMDB, he is dead]
Favorite Lines: