You're an Office Manager and I'm Dead 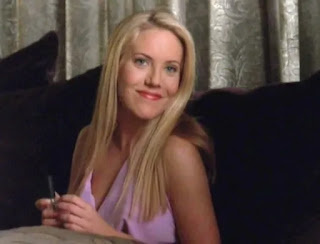 So in the season three finale of Buffy, Harmony got bit by a vampire – then the next season revealed she was one and dated Spike, and then had a hissy-fight with Xander. Then this season she had minions, making Buffy laugh a lot, dated Spike some more, broke up with Spike for the third time,  and now you’re all caught up! 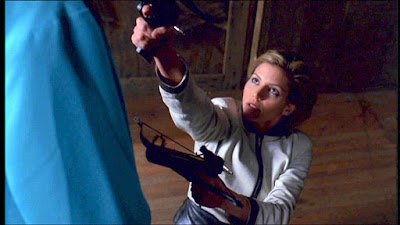 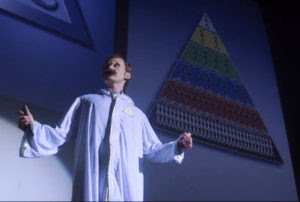 Daniel: “I think your friend should reconsider the name Harmony” – Lorne, in response to Harmony’s singing
Zelda: “I picked up on the ‘betwixt and between,’ ‘gotta find my corner of the sky’ vibe.” – Lorne

All That Matters Is What We Do 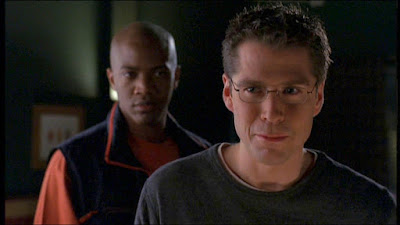 “Angel has an epiphany which has him questioning his actions over the past few months. Meanwhile, the three eyed demon clan is after Gunn, Wes and Cordy. It’s up to Angel to save them … if they can all start trusting him again.”

Zelda’s Thoughts:
All right y’all. Let’s have us an epiphany.
Starting where we left off, with Angel waking post-coital with a gasp. As in Buffy, he runs out into the rain, his shirt half on. Pretty sure this rain only exists at the Hyperion, since Cordy doesn’t seem to encounter it on her money-getting errand/trap.
Darla assumes what we’re all assuming (if we don’t know the future), that his soul is flying the coop and soon he’ll be smoking and wearing eyeliner again.
But Angel looks at her, stricken. “You saved me.”
And he apologizes to her. And somehow that apology makes her realize it didn’t take. “You saved me. I’m sorry I couldn’t do the same thing for you.”
She even asks the same thing poor Buffy asked, “Was it not good?”
Angel agrees it was perfect. “It was perfect despair.”
He says she’s always been the reason, for everything. (um, okay) I don’t quite know why he’s classifying sex with her as saving him from what he was sinking to.
But on the plus, what she’s saying is making him recall echoes of the message Kate left, and he rushes off to save her. And he’s able to enter her home, even though he’s never been invited in. And he couldn’t save Darla. But he can save Kate.
Powers-That-Be intervention? Or was she truly, momentarily dead?
Honestly I have to go with PTB because … if she was dead he would have had to do CPR, and he told us he couldn’t administer it to Buffy in “Prophecy Girl” because he has no breath. If the show doesn’t want me to call shenanigans, it has to be PTB intervention.
Darla’s back at Lindsey’s, where he knows he has to keep her even more of a secret. But she’s got the ring that Angel stole, and Lindsey recognizes it. Apparently after Angel swiped it they disenchanted it, so Darla doesn’t even get her Power Ring. She’s having a rough year.
Caritas in off hours! Lorne’s got an adorable honeycomb-colored robe. 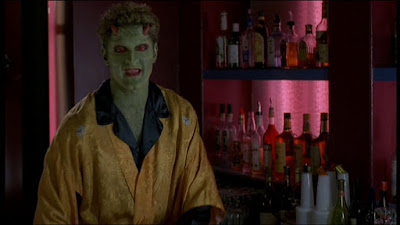 Favorite Lines:
Zelda: I was tempted to go with the line that everyone knows, but I really like this one too:  Angel: “I don’t know how to get back.” // Lorne: “Well, that’s just the thing. You don’t. You go on to the new place, whatever that is.”
Daniel: Gunn: “You just wake up and, ‘bang?’” Angel: “Kinda the other way around.”