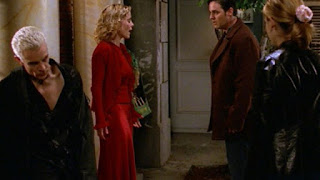 "Anya returns to Sunnydale, bent on revenge for Xander leaving her at the altar. She has since become a Vengeance demon again, but ends up hurting Xander in a way she never expected."

Warren: The milk. In the fridge. How long 'til it expires?
Andrew: Well, we got it on Friday, and I remember noticing there wasn't a full two weeks on it, but we did get it in the fridge pretty quick, unless I'm thinking of the 2% milk ...
Zelda: That's why I buy almond milk.
Daniel: Me too!

Zelda: "Things fall apart. They fall apart so hard ... You can't ever put them back the way they were ... I'm sorry, it's just - you know, it takes time. You can't just have coffee and expect ... There's just so much to work through. Trust has to be built again, on  both sides. You have to learn if - if we're even the same people we were, if you can fit in each other's lives. It's a long ... important process, and ... can we just skip it? Can you just be kissing me now?" - Tara
Daniel: "We should have been dead hundreds of years ago and we're the only ones who are really alive." - Spike

"After Buffy is stung by a demon, she begins to have vivid day-dreams about a mental asylum. She gradually begins to believe that she is a crazy girl back in L.A. and that Sunnydale and all her friends are just a figment of her imagination."

Crossfire!
You want more crossfire? Did you not read any of this post?