Last Night, You Know, Did Anybody, um...Burst Into Song?

"Last night, you know, did anybody, um...burst into song?" ~Buffy Summers, Once More with Feeling


Sunday night, Zelda and I had the pleasure of attending GayGeeks of NY’s 2nd annual Buffy musical sing-along and trivia contest. Having bought VIP tickets, our group of four was allowed to arrive an hour early in order to get seats – and it’s a good thing we did!  The venue, Vlada, was packed with over two hundred people eager to sing along with Buffy and the rest of the Scoobies.

There were few seats, but our own gang of Scoobies was able to score a couch near the stage.  As VIP ticket holders, we also got sing-along sheets with all the lyrics (not that we needed them!).  Vlada’s bar even stocked special Buffy-themed cocktails: Sweet’s Cocktail was a deliciously sweet drink made from Strawberry Vodka and Sprite, while the “Mustard-tini” was a yellow concoction made from Lemon Vodka, Pineapple juice and something else that I’m sure made it very good…but that I refrained from.  The hosts of the evening promised that it neither included mustard nor tasted like mustard [But … it still had mustard in the title, which ew. – Z].

And then the night started! Along with Gay Geeks of NY’s founder, Nick DelGiudice, our M.C. for the evening was Miz Jade, who had the dual duties of being both host and Once More with Feeling’s Big Bad, Sweet….nicknamed Sweet Ass Sweet.  After a few introductions, the overture began to play and blonde-bewigged actress Mara Dratfield stepped out through the fog (yes, there was a fog machine), carrying a stake and lip-synching the opening number, “Going Through the Motions.”  From then on, we got number after number of actors having the time of their lives.  The songs were all lip-synched – except, of course, for Sweet’s “What You Feel,” which was belted out by Miz Jade, with Billy Hannon accompanying her on piano (and providing Dawn’s part in a jazzy tenor).

And of course, alternating with the performance were rounds of trivia!  Twenty-one teams full of Buffy nerds with team names such as “Clem’s Kittens,” “Mmm Cookies,” and “Slayerfest ‘13” competed in four different trivia rounds throughout the evening.  Two of the rounds were the traditional simple question and answer round.  But simple is probably not the right word, considering you really had to be a Buffy expert to know the answers to these questions. (Quick! What high school did Buffy attend before Sunnydale? What song did Giles sing at the Espresso Pump? Who among the Scoobies likes Onion Blossoms? And – for the truly insane – who played Willow in the unaired pilot?)

One of the other rounds was “Don’t Forget the Lyrics,” where one member from each team had to go up on stage, choose a random number which corresponded to an excerpt from the Buffy musical and finish the lyrics.  Zelda, being the only brave one of us, represented Team “Ampata’s Mom Jeans,” a name proudly chosen by our teammate Matt.  This round’s points were based on difficulty and length of the lyrics.  Zelda, as chance would have it, chose one of the most difficult ones – a section from “Life’s a Show” – and won 8 points for our team!  [You guys, holy crap, I was shaking. There’s a reason I never tried to pursue a career in musical theatre. – Z] Considering most of the teams couldn’t even get their three pointers, I was a very proud co-blogger indeed. [I then promptly fainted. You know … metaphorically. – Z]

The final trivia round was called the “Hush” round, where one team member chose four episode titles at random to act out – charades style – for the rest of the team.  Matt acted out “Fool For Love,” “Touched,” “Band Candy,” and “The Pack” beautifully but unfortunately time ran out before we could guess the fourth.
And we’re happy to say that we placed second out of the original twenty-one teams.  Not bad, though we missed it by one point! 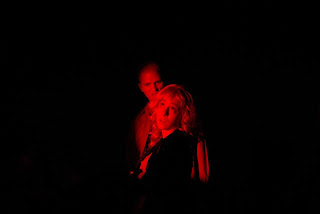 All in all, we had a fabulous night with Gay Geeks of NY’s interpretation of the songs of Buffy, along with some added bonuses:  we got to shout “Shut the fuck up, Dawn!” to Billy Hannon, who played Dawn as a kleptomaniac, stealing everything she could get her hands on; the mostly-silent Willow shouting “Oh Shit” when Buffy revealed she was pulled out of heaven; and other fun asides, such as when Sweet Ass Sweet asked Dawn how long she’d been living in Sunnydale – “Oh, about a season and a half.”

All proceeds for the evening went to The Trevor Project, a great organization that you can learn all about here. Thanks for a great night, Gay Geeks of NY! 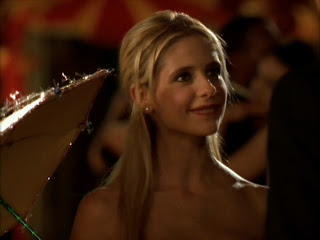 "After Angel breaks off their relationship, Buffy single-handedly battles three fearsome hell hounds so that her classmates can enjoy their senior prom."

Daniel & Zelda: "We have one more award to give out. Is Buffy Summers here tonight? Did she, um ... This is actually a new category. First time ever. I guess there were a lot of write-in ballots, and, um, the prom committee asked me to read this. 'We're not good friends. Most of us never found the time to get to know you, but that doesn't mean we haven't noticed you. We don't talk about it much, but it's no secret that Sunnydale High isn't really like other high schools. A lot of weird stuff happens here ... But whenever there was a problem or something creepy happened, you seemed to show up and stop it. Most of the people here have been saved by you, or helped by you at one time or another. We're proud to say that the Class of '99 has the lowest mortality rate of any graduating class in Sunnydale history. And we know at least part of that is because of you. So the senior class offers its thanks, and gives you this. It's from all of us, and it has written here, 'Buffy Summers, Class Protector.'"

90s Factoid:
Yes, they're all 90s songs but we feel the song playing at the beginning of the prom, Praise You by Fatboy Slim really gives that 90s feel. And it's got this amazing video:

Why Couldn't You Be Dealing Drugs Like Normal People?


"The Mayor takes Willow prisoner after Buffy and her friends steal away a box containing demonic energy needed for Ascension Day." 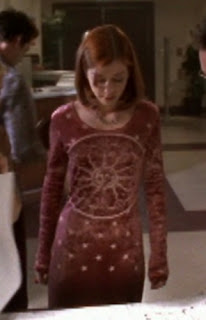 Daniel: “Of the two people here, who is the boss of me?” - Willow
Zelda: As the Scoobies debate whether to go after Willow or perform the ritual to destroy the Box of Gavrok, Oz wordlessly destroys the spell stuff so that they have to trade the box for Willow. BECAUSE HE LOVES HER AND THIS IS NOT A CONFLICT OF INTEREST FOR HIM.

Retraction: (as published in our review of Graduation Day: Part 1) We would like to retract our previous stats/scoffs of Choices where we mocked Sunnydale's sudden acquisition of both an airport and a university. Sunnydale's airport first reared its implausible head in What's My Line: Part 1 (when Kendra arrived), and Sunnydale's Crestwood College's Frat House o Penises (Delta Zeta Kappa) made an appearance in Reptile Boy. But for the record, Crestwood is not UC Sunnydale, so ... snap. 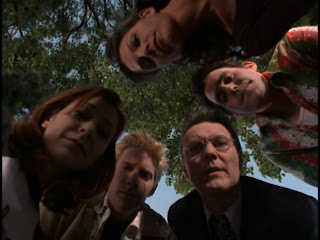