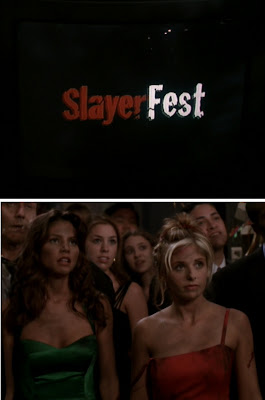 
As Buffy and Cordelia vie for Homecoming Queen, a group of killers gathers to participate in SlayerFest '98. 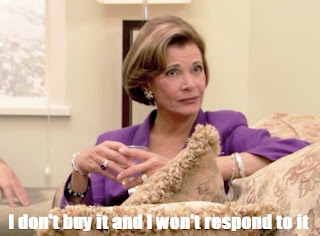 At this point in the series, did we already know the Mayor is evil before he hires Mr. Trick? Is that an evil reveal? We can't remember anymore when we didn't know, because we're old and stuff. Snyder has invoked his name in evilish ways ("Tell the Mayor I have good news"), but so has Joyce in non-evilish ways. Zelda thinks it might count as an Evil Reveal when he wants to hire Trick rather than eliminate him, but her doubts are enough that it's not currently in our stats.

Daniel: "The point is, I haven't even broken a sweat. See, in the end Buffy's just the runner-up. I'm the Queen.  You get me mad?  What do you think I'm going to do to you?" - Cordelia
Zelda: "We have to find Buffy. Something terrible's happened. Just kidding. Thought I'd give you a scare. Are those finger sandwiches?" Giles, you are so my spirit animal.

Two Scoobies Answer: Who Are You?

Zelda is Giles
One of the first things I knew about Daniel was that Anya was his favorite character, and the one he most identified with - he also said as much here. And though I said Buffy was my favorite (she still is), I wouldn't say she was the character I'm most like - I was never going to be a Gryffindor. At first I thought maybe Willow was my character twin, what with being a wiz in school and kind of shy and awkward, but there are huge chunks of her personality which don't coincide with mine. Then last week, Daniel showed me this amazing gif (above) of Anya and Giles fighting in Tabula Rasa. And I realized: ...Oh. That's who I am. I'm the know-it-all who actually does know a lot of random useless stuff. I'm Ravenclaw. I've got a dry sense of humor, I'm too classy to drink beer (actually, I just don't like the taste), and I'm fiercely loyal to those whom I love. I would slice that Mayor's face anytime he threatened my homies. Oh, and I can be super freaking scary when I want to be.

But most importantly, perhaps, to this whole discussion is this:

"Yes. Well. I appreciate your thoughts on the matter. In fact, I encourage you to always challenge me when you feel it's appropriate. You must never be cowed by authority. Except, of course, in this instance when I am clearly right and you are clearly wrong."

I don't really have to explain any more at this point.


When Zelda first proposed this as a blog topic, I was excited, if not a little bit nervous.  I've always been loud and proud about my fondness and appreciation for Anya Christina Emanuella Jenkins and how much I identify with her. But when forced to put my thoughts to paper computer about how exactly I'm like her, at first I came up with a big flat blank.I was worried at first that I wasn't like Anya at all; that I just aspired to be like her.

To describe her superficially, you can say she's loud and tactless: two things, I pride myself in not being.  But if you examine her a little deeper, I think Anya is more self-conscious and needy than most of the Scooby gang.  She puts on a brave front with her sarcastic quips but the things she wants most is extremely human.  She wants to be loved and she wants to be part of the group.  She's often self-conscious about Xander and whether he really truly loves her.  And while the latter (wanting to be part of the group) can certainly be argued, I saw no other reason for her to stay with the group after her and Xander's break-up.

And that's why I was a little apprehensive about doing this blog post:  Because Anya and I often share the same insecurities about life, love & friendship.  Our tactics in hiding it may be slightly different, but what lies underneath certainly isn't.

Also, I provide much needed sarcasm. 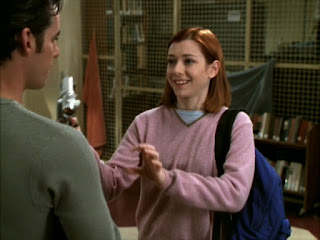 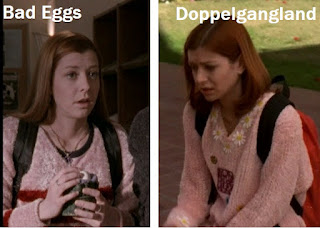