"Enraged after Tara's death at the hands of Warren, Willow turns to the Black Magics to exact her revenge."

Z: Did the screen actually say where they are?
D: No. Where are they?
Z: Africa.
D: How'd he get to Africa?
Z: MOTORCYCLE.
D: I always assumed that it was some tribe in southern California or New Mexico or something.
Z: Yes, Sunnydale - in addition to its airport, train station, bus depot, amusement park, docks - has an African village.

Zelda: "I miss Ferris Matthew. Broadway Matthew, I find him cold." - Andrew. It's funny because it's true.
Daniel: Xander: When? Anya: When do you think?

Anya's Hair - blonde, ponytail, sideswept bangs
Dead Humans - 1 (even if this gets undone by the comics)
Dead Undeads - 1 (Warrenbot)
Dead Flashbacks - 0
Buffy Breaks a Door - 0
Evil Reveal - 0 (We're not counting Willow because it wasn't a surprise reveal so much as a plot development)
Unevil Reveal - 0
Shenanigans Called - 0
Apocalypse Called - 0
Posted by Banya at 11:47 AM No comments:


"Willow and Tara wallow in their togetherness [wtf is that phrasing? - Z], but things aren't as happy everywhere else. Buffy has to face both Xander and Spike, whilst tracking Warren and Company to foil their next move." 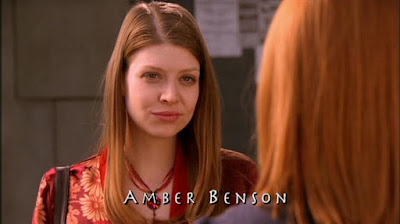 Warren: Oh, Relax. All right, you'll each get a whirl, soon as I'm done playing with them.
Daniel: With his balls.
[Daniel and Zelda giggle like middle school boys]

Daniel: "And then you get all excited with the tingly anticipation, but wait! Not so fast! There's the apocalypse, and the back from the grave, and the blah blah blah blah blah, and by the time you're finally standing there in that beautiful expensive white dress you've dreamed about ever since you became human, he's gets all heebie-jeebie and decides, "you know, I'd rather just go steady."" - Anya
Zelda: "I got hot wings!" - Clem