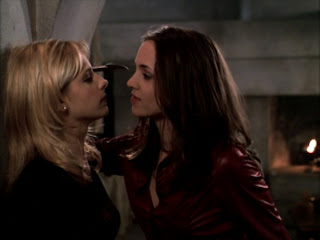 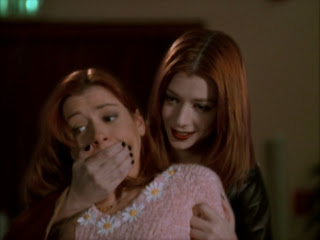 Zelda: "You think I'm boring." // "I'd call that a radical interpretation of the text." - Willow/Oz, because I have used this
Daniel: "For a thousand years, I wielded the powers of the wish.  I brought ruin to the heads of unfaithful men. I brought forth destruction and chaos for the pleasure of the lower beings.  I was feared and worshiped across the mortal globe.  And now I'm stuck at Sunnydale High! Mortal. Child. And I'm flunking math!" - Anya 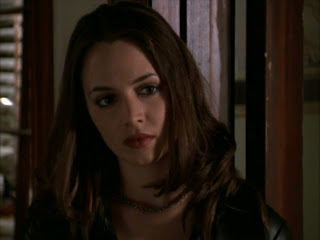 "A homicide detective closes in on Buffy and Faith as he investigates the deputy mayor's death."

In our review of Faith, Hope & Trick, we had a crossfire about Faith's living arrangements. Zelda called Shenanigans on Kakistos's being able to get his arm through the door of Faith's apartment. Daniel pointed out that this was more a motel than an apartment, not a long-term living situation. Here, with Angel's being able to enter Faith's apartment without an invite is definitive proof that Daniel's assessment was correct.
Daniel: I WIN THE CROSSFIRE.

D: What large glowery windows you have there, Angel.
Z: It's the stupidest house for a vampire in the world.
D: Yes, and I wanna live there.
Z: It's made of styrofoam. 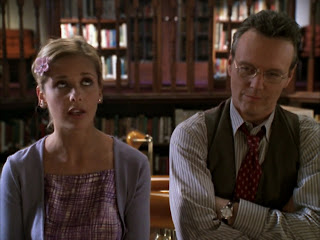 "Faith convinces Buffy to live on the wild side, with fatal consequences." 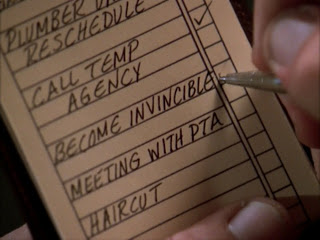 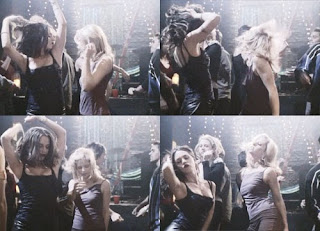 Hey! I made a Sporcle game!  Check it out: Buffy - Who said what?

Zelda: "Whenever Giles sends me on a mission, he always says 'please.' And afterwards I get a cookie." - Buffy. Everything about this is perfect, especially her chirping delivery of cookie, and Giles smiling but trying not to, in response.
Daniel: "The count of three isn't a plan.  It's Sesame Street" - Buffy.

Did I Mention That I'm Having a Very Strange Night?

"Xander experiences an adventure of his own when he encounters a group of reanimated corpses out to construct a bomb. Meanwhile, Buffy and her friends battle the forces of evil when the Hellmouth reopens." 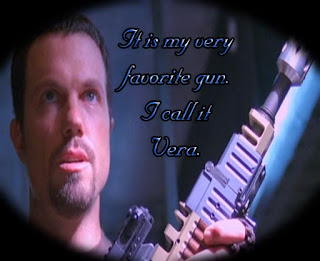 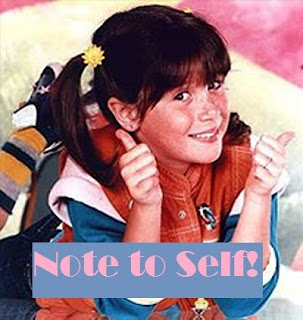 Daniel: Xander: "Is it about the talking? You know, the way you tend to express yourself in short, non-committal phrases?"// Oz: "Could be."
Zelda: "I always have a jelly. I'm always the one that says, 'Let's have a jelly in the mix.'" - Giles