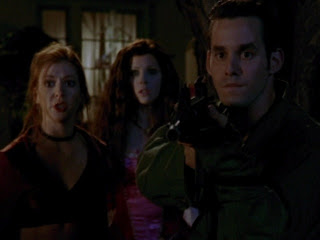 
"On Halloween, Buffy and her friends patronize an unusual costume shop where customers turn into whatever costume they are wearing." 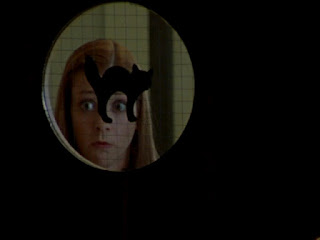 "Buffy and Cordelia attend a frat party where they are offered as human sacrifices to a reptile-like creature." Yes, it's just as dumb as it sounds.

Daniel:  "Oh Buffy, it's like we're sisters, but with really different hair!" - Cordelia
Zelda: "Some guy's attacking Buffy with a sword. And also there's a big snake." - Willow. Why couldn't we just summarize the whole episode like that and then not have to watch it?

I'm so stuffy. Give me a scone. 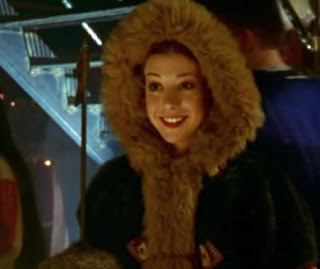 "A beautiful Inca princess who was buried alive in a tomb 500 years ago is brought back to life."

Okay. Man. I want to like this episode. Or rather, I want to not hate it. I want it to not be shrouded under Reptile Boy's shadow of pure suckage. So I try to keep reminding myself that it's not as bad as I keep thinking it is. And it's not, it's not as bad as I keep thinking it is. But. It's also not good. Here's my main beef: I get that the Mummy (I'm not calling her Ampata because Ampata is a dude) is meant as a bit of a foil for Buffy - she was chosen as a sacrifice to protect her people; Buffy was also chosen, not necessarily as a sacrifice (though that could be a side effect), but as a protector of her people. Neither one had a say in the assignment of this role, and both have had to play with the hand they're dealt. But. The Mummy makes bad, wrong, immoral, WRONG choices. Choices Buffy would never make. It's the same situation that comes up with Ford in "Lie to Me," but I don't think the Mummy is given the same level of condemnation, though she should be - "You have a choice. You don't have a good choice, but you have a choice. You're opting for mass murder here, and nothing you say is gonna make that okay." Nothing is gonna make the Mummy's behavior okay, and by the way NO KILLING JONATHAN IN HIS VERY FIRST EPISODE. Now to the bullets: 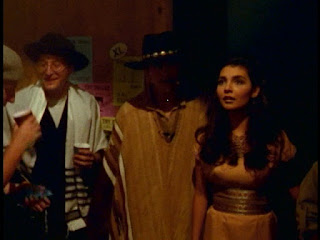 Xander: Oh, yeah. Fall for the old 'let me translate that ancient seal for ya' come on. Tsh. D'ya know how many times I've used that?
Zelda: Ha!
Daniel: PSh. Shut up Xander.
Zelda: It's funny!
Daniel: It's not funny!
Zelda: You're not funny.
Daniel: Your face is not funny. 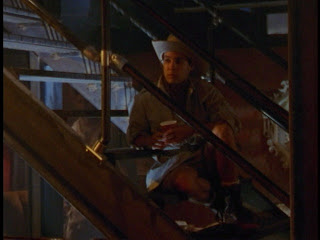