A Sea Captain or Something

"It's the day of Xander and Anya's wedding. Emotions are running high with Xander's dysfunctional family clashing with Anya's demon friends. The ceremony is disrupted when an old man claiming to be the future Xander shows up." 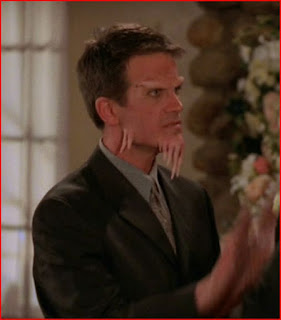 Favorite Lines:
Zelda: "Well, there are ancient ways ... Clowning as an occupation, grew out of the commedia del'arte, and uh ancient sports, of course." - Clem
Daniel:  'I, Anya, promise to ... love you, to cherish you, ...to honor you, uh, but not to obey you, of course, because that's anachronistic and misogynistic and who do you think you are, like a sea captain or something?' - Anya


Recurring: Tara, Xander's dad (recast), D'Hoffryn, Halfrek, Clem
First (and only) appearance of the oft-mentioned Uncle Rory
Shoutout to Xander and Willow getting it on in formal wear