A Muscle Cramp...In Your Pants? "After Dawn talks to a guidance counselor about her feeling lonely, she accidentally puts a spell on Buffy and her friends, trapping them inside the Summer's house with a sword-wielding demon." 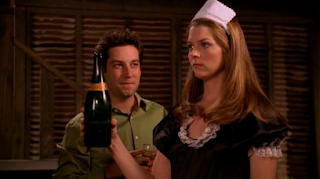 "After Jonathan, Andrew, and Warren accidentally kill Warren's ex-girlfriend Katrina, they set up Buffy to make her believe it was she who killed the girl."

Here, if you guys are feeling sad, just look at SMG laughing in the dailies! 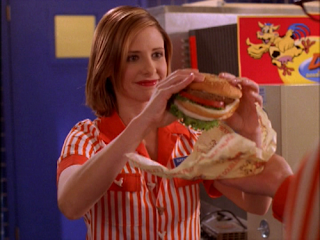 
"When Buffy gets a job at the Doublemeat Palace, a local fast-food restaurant, she begins to believe that disappearing co-workers and the secret ingredient to the restaurant's hamburger may be connected."

Favorite Lines:
Zelda: "See, this is why demons are better than people ... When I was a vengeance demon, I caused pain and mayhem, certainly. But I put in a full day's work doing it, and I got compensated appropriately ... But supervillains want reward without labor, to make things come easy. It's wrong. Without labor there can be no payment, and vice versa. The country cannot progress." - Anya
Daniel: