And the weird behavior award goes to ... 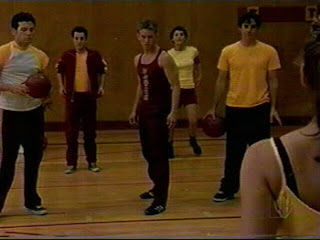 "Xander and several other students are possessed by the spirit of a demonic breed of hyenas that wreak havoc at the high school."

Let's take a moment to talk about popular kids or the writers Matt Keine and Joe Reinkemeyer's version of popular kids. (This team also wrote "Inca Mummy Girl", so...) This set of 30 year old models represent mean HS students except they're all...so...lame... And I guess bullies generally are lame, but I can't imagine anyone taking them seriously. Kyle, Rhonda, Tor (Tor?) and Heidi (thanks IMDB, I think Kyle is the only one that ever gets called by name) are played by actors who can't act. Luckily most of them hardly speak - including Jennifer Sky - who was awful as Sarah Webber on General Hospital. (Yes, I watch GH. Yes, I feel shame.) [You frighten me. - Z] Also, when they're gathering around Flutie trying to be "threatening", I'm confused as to whether they want to kill and eat him or...fuck him...especially the Blond guy. Tor. Oy. Stop touching Xander seductively, Tor. 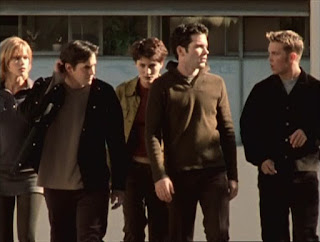 I have much less issue with this episode than Daniel does. While I agree that the acting of the bullies/pack is sub-par, I don't think it detracts any more from the episode than Owen's muddy line-readings in "Never Kill A Boy..." [Owen is fantastic. You shut your whore mouth - D] They're not great, but mercifully this is our only episode with them, so I tolerate them (and they will never rival my least favorite one-off villain of all time, The Loan Shark of "Tabula Rasa." That was awful). But they're really the only weak link - I think the metaphor is fantastic, especially in how it translates a mob mentality - the need to laugh at weaker parties in order to seem strong - into the hyena pack - capitalizing on both the hyena's brutal scavenger nature and its signature "laugh." I also really love that this episode shows off not just NB's range and skill - he's quite good at playing cruel and dark, and we don't get to see him do it much (the only other example I can think of right now is "The Wish") [Hell's Bells...D] - but also giving us a small peek into how good Willow is at being sad and how Freaking Huge her eyes are. Further thoughts and quibbles ...

Mostly handled without bloodshed above.

Favorite Lines:
Daniel: "It's devastating. He's turned into a sixteen-year-old boy. Course, you'll have to kill him." - Giles
Zelda: "How terribly frustrating for you, that a bunch of schoolchildren could accomplish what you could not." - Giles, being awesome.

This took place in the 90s.