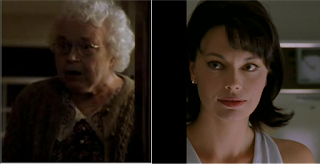 "Buffy's biology teacher is killed by a giant praying mantis that assumes the form of a beautiful substitute teacher. Her next victim will be Xander unless Buffy can stop her."

Sorry, we're in complete accordance this week. No crossfire for you. Kill us both, Spock!
﻿﻿﻿﻿
﻿
Favorite Lines:
Zelda: "And while we're on the subject, what kind of a girly name is Angel?" - Xander
Daniel: "No dear, I'm right here." - Natalie French (the real Natalie French)
﻿