In Defense of Riley Finn

In Defense of Riley Finn


or... Why Riley Finn is the Perfect Boyfriend

You can’t talk about Riley before first mentioning Owen.  The lovable and adorkable hunk made only one appearance in Never Kill a Boy on a First Date, but he made a lasting impression in my heart.  He’s a precursor for Riley and I wouldn’t have been surprised if they were somehow related – an opportunity severely missed in the Buffy Universe.  They’re both hunky, larger than life, big doofballs; manly men with hearts of gold.  They want to help.  They want to be your hero.  They want to be Indiana Jones and John McClane all in one; but maybe not Jack Bauer.  They want to save the day.

“Owen is just so Owen-y”, says Buffy and that sentence may make some sort of sense that’s not except you completely understand what she means.  In the same regard Riley is just so Riley…y. When Riley first meets Buffy, he barely notices her.  He immediately takes a liking to Willow because of their mutual love for psychology, reading ahead and the learning part of learning

But then something magical happens. Riley notices Buffy; not because “she’s so hot, she’s Buffy”, but because of the way she defends her friends – and also her adorable peculiarities. I think if it were all about Buffy’s hotness, Riley would have started wooing her from the moment he met her in the campus bookstore. And then the wooing!  What boy woos anymore?  A cornbread Iowan boy whose momma brought him up right – that’s who.

And the courting is fantastic.  We get to see what Riley is all about.  First, he goes to the best friend for information.  And he’s not all sneaky about it; he’s charming and not in a smarmy way.  He uses his knowledge of her cheese-loving for good; if not awkwardly.  And finally Buffy gives in.  Because how can you not?  Especially after the string of love interests she’s had thus far.  From Angel “I turned evil when we consummated our relationship” to Parker “I turned evil when we consummated our relationship,” Buffy hasn’t had the greatest past when it comes to boyfriends.  So it’s no wonder that she gravitated to this beautiful, sweet, husband-material type guy.

Some say that Riley was a “safe choice”; someone she could rely on who wouldn’t cheat or leave her.  But if that were true, why not choose Xander?  Someone who has been devoted to her from the beginning?  Perhaps it was the timing.  Maybe if Xander had met Buffy in college after her experiences with Parker and Angel, he wouldn’t be stuck in that ‘friend zone’.  Or maybe it’s that one element that Xander doesn’t have: being a bad ass solider. (Shut up, his knowledge from Halloween doesn’t count.  It’s only used once in a while by the contrivance fairy.)

So their relationship progressed.  Buffy slowly let Riley in…..very slowly.  They started dating but waited a while to sleep together.  Finally, in Hush, Riley & Buffy unintentionally revealed all their secrets.  It took a little bit for the shock to wear off, but Riley seemed happy to have a superhero girlfriend and didn’t seem that bothered that she was way stronger than him. 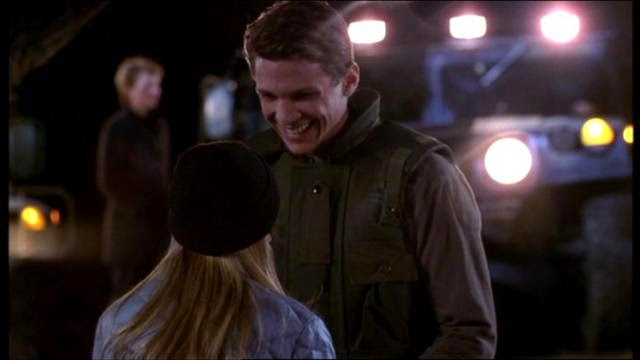 When they finally sleep together, several episodes later, Riley is there when she wakes up which Buffy isn’t expecting.  She isn’t used to it, but it’s exactly what she needs at that moment. I bet he even called the next day…at least he would have if his boss hadn’t tried to kill her.

This was a time in both Riley and Buffy’s lives where they needed someone stable to deal with some emotional blows.  Riley certainly needed Buffy when his world came tumbling down; when he found out his boss (“mother”) was using her research for evil. And Buffy was indeed there for him.

But then it happened. Buffy got to a point where she didn’t need Riley anymore.  She had her friends for moral support and didn’t need the grounded boyfriend she had gotten used to.  She was too strong for him and Riley needed to be needed.  So yeah, Riley had some big flaws right there. He needed to be needed and ended up going somewhere else just to feel – something Buffy will do in a couple of seasons. And cheating isn't something I take lightly. Riley was an ass to cheat on Buffy instead of talking to her about how he was feeling.  But the thing is, Riley wasn’t an ass but circumstances were turning him into one and he needed to go.

That's why the ultimatum he gives Buffy is ridiculous but necessary. It’s what he needs to do to get out and move on. He admits to Xander early on in season 5 that he knows Buffy doesn’t love him (Btw, a friendship that I wouldn’t have minded seeing developed).  And I’m not sure he was 100 per cent right about that.  I think Buffy loved him in her own way but she needed something she never ever quite got.  What was it that Buffy needed? More passion? Angst? Depressing men with stupid hair?  That’s the subject for another time.

It’s interesting that Riley is the one person in the Buffy universe that gets a happy ending when it comes to relationships.  I was glad to see him come back for one final episode, married to a strong woman – another superhero – but one that needed him as much as he needed her.  And I’d like to think that Buffy was happy for him.  Because in the end, despite his flaws, Riley was a good guy that deserved to be happy - even if it wasn't with Buffy.

Also, try my new sporcle game: Which Buffy Season Was That?