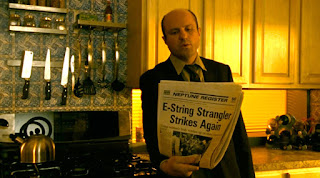 Stats:
Dead Humans - 0 (yes, there are dead women in the case, but we don't have eyes on the corpses)
Backup Sighting - 0
Veronica Breaks In - 1
Veronica Tases Someone - 0
Mac Hacks - 1
Who's Your Daddy? - 0
Wallace Does Veronica a Favor - 0
Weevil Does Veronica a Favor - 1
Veronica Wants a Pony - 0
Logan Punches Someone - 0
Dick's Single Entendres - 0
Shenanigans Called - 0
VERONICA WAS RIGHT - 0
VERONICA WAS WRONG - 0
Posted by Zelda Knapp at 11:50 AM