I'm just glad we're done, at this point. And it's too bad that that's all I'm feeling. I would kill for more Mac and Weevil in this season, and a hell of a lot less Dick. I think a lot about the rapist arc was handled piss poorly, especially considering Veronica's history with sexual assault. The mystery of the Dean's murder was at least a cool mystery, even if the convoluted path by which Tim Foyle exacted his revenge ... doesn't quite make much sense if you examine it too closely. We barely got any time with the Castle, which I assume was at some point going to become a pivotal organized enemy, replacing the Fitzpatricks (although if the FBI pitch had sold, that would be one more thread dropped). Okay, what good things did the season give us? James Jordan was hilarious as Tim Foyle. I thought the angst (as well as the schmoop) of the LoVe ship was generally well-written and well-performed. Piz and Parker are cuties who never stood a chance. For a few weeks, Neptune had a competent sheriff and everyone hated him for it (except newly-reinstated Deputy Leo).

All this to say: I'm really looking forward to our rewatch of the film, which unlike so many of the nostalgia returns we've gotten, did not disappoint (*glares pointedly at Gilmore Girls). No one felt horribly out of character, nor did anyone seem like they'd sat in character growth stasis in the ten years away (coughRORYEFFINGGILMOREcough), and there was good fanservice with so many returning players, without feeling overly self-indulgent.

I really hope the canon season four continues to satisfy. We're almost caught up to now!

Daniel's Thoughts:
As to what Zelda says above: 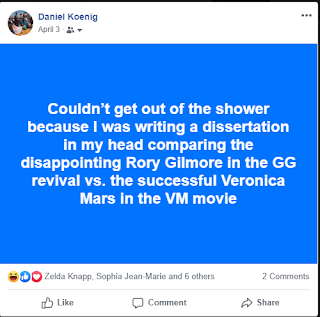